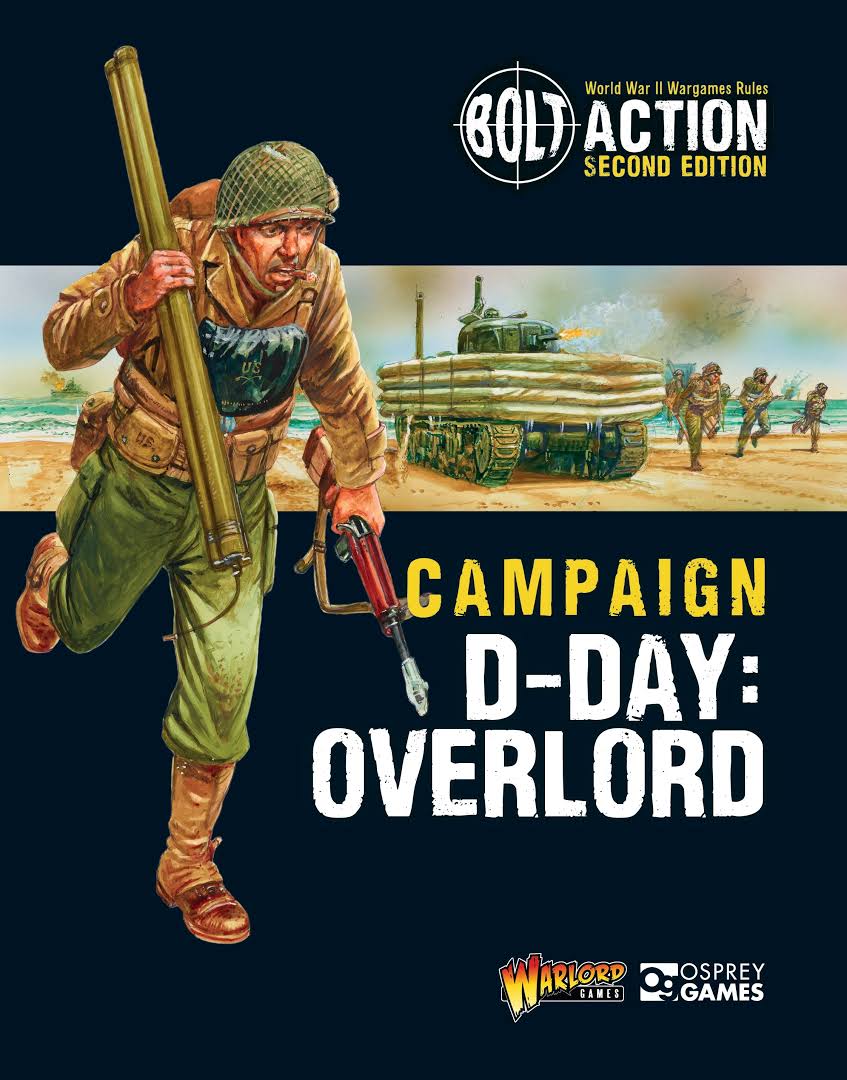 Last year we celebrated the 75th anniversary of the fateful day when Allied forces storm the beaches of Normandy. While the initial wave consisted of American, British and Canadian forces landing, it was a concerted effort of all western allies to defeat Germany and end the terrible conflict that took millions of lives.

For us wargamers, this anniversary brought many interesting books, and one of the supplements that commemorate this event is Campaign D-Day: Overlord for Bolt Action, released by Warlord Games and Osprey.

The first thing you will notice is that this softcover book is very thick. At 216 pages it is twice as long as some other campaign supplements or especially – army books. Most of the content covers 19 historical scenarios and the other half of the book are new army lists, units, and additional rules you can use in your games.

As usual, there are some fantastic photos like the one you see below: 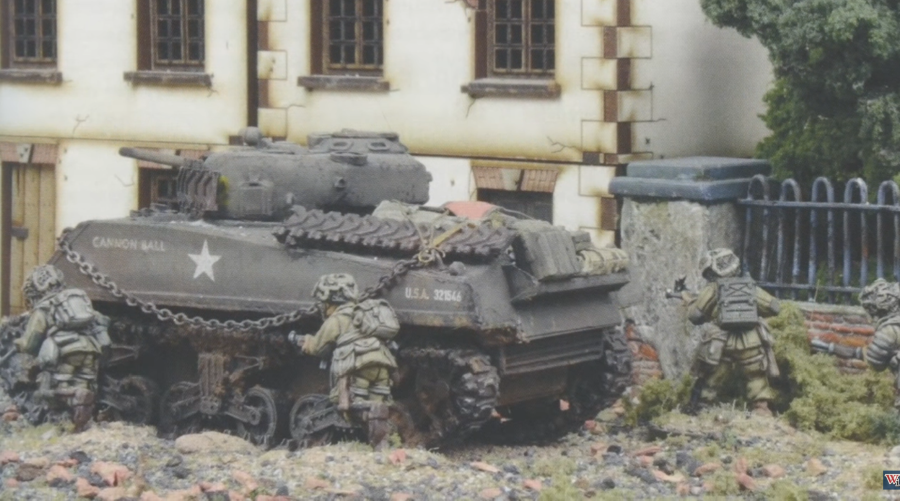 And since this is Warlord Games/Osprey collaboration, the supplement is illustrated with the usual gorgeous artwork that we’ve seen in books by Steven Zaloga, Gordon Rottman, and other well known Osprey authors. Scenarios also feature clear and concise maps.

Scenarios for The Longest Day

This book features 19 missions allowing you to replay various operations and battles at a reinforced platoon level. These are not just the missions with army lists: they rather tell the gripping story of one of the decisive days of World War II with historical notes and analysis.

And while the book is titled Campaign Overlord, there are many more operations covered inside that led to Normandy landings. You can replay not only landings on Juno, Omaha, Sword, and Gold beaches but much more. Scenarios cover Operation Tonga – daring British airborne raid on Pegasus Bridge, US Airborne landings with famous battles of Brecourt Manor (and there are even rules allowing you to field Major Dick Winters!). Finally, the last scenarios recount German counterattacks trying to push allies back to the sea with ersatz (reserve) divisions and training battalions.

Scenarios are intended to be played at various amounts of lists, typically 1000 – 1500 per side. What’s interesting, some of the scenarios like “Skirmish in the Dark” feature randomized reserves. This random factor + structured deployment makes them suited for solo play perfectly. So if you’re a solitaire player you will get a lot from this book.

There are several elite theatre selectors for British (including Canadians) and United States forces. Both armies can field historical units like the 6th British Airborne (interestingly, Brits had only two paratroop divisions, but they named it “6th” to confuse Germans) or US Beach Landing Reinforced Platoon. 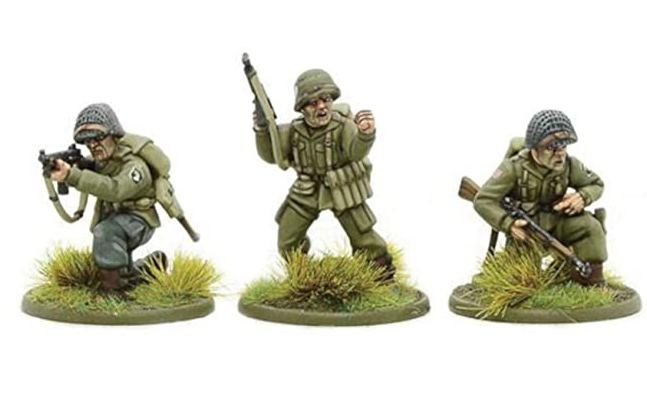 The Germans are also really interesting. Hitler didn’t expect landings at Normandy due to allied misinformation and diversion campaigns, so divisions stationed at Normandy contained mixed second-grade conscripts, fanatical ROA troops, and some veterans to augment them. Besides 21st Panzer Division, which is a pretty standard armored list, other forces are Static Division Resistance Nest with “Second Rate Division” rule (no veterans!) and 100th Panzer Replacement and Training Battalion, using old French tanks like Renault FT-17 from World War I, captured during Blitzkrieg. As you can see, there are no elite troops, Eastern Front veterans, or Fallschirmjager and instead, as a German commander, you’ll be fielding conscripts heavily entrenched in bunkers, Tobruk pits, and trenches.

There are quite a lot of new infantry units. The US gets Airborne Engineers and Pathfinder Squads, allowing you to expand your paratroop platoon with specialists, in addition to various kinds of beach landing squads. We also get Airborne Jeeps and Sherman DD (duplex drive) that can float on water! 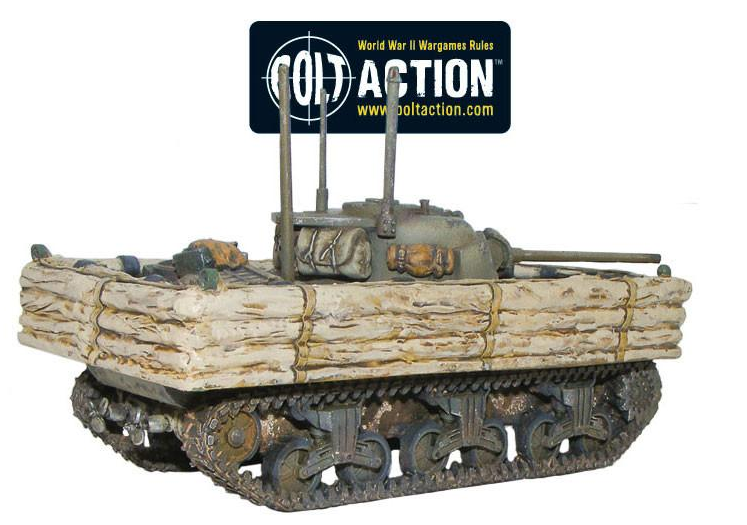 Germans have reluctant forced conscripts from occupied territories of Poland and Russia, but also Vlasov’s ROA fanatics, mostly Ukrainians that joined Wehrmacht due to their hatred of Stalin for the persecution of Soviet nations. But the Germans also had a severe shortage of armored vehicles at this point of war, which resulted from an air bombing campaign conducted against the Reich industry. They had to resort to using desperate measures to fortify beaches, drawing from the pool of obsolete vehicles captured in the 1940 campaign in France. You won’t get to field big cats, but instead, you have to fight with converted and repainted Vickers’ Mk VI, left at the beaches of Dunkirk, Hotchkiss H35 and 39 (renamed by the Germans Panzer 35h/28 h) 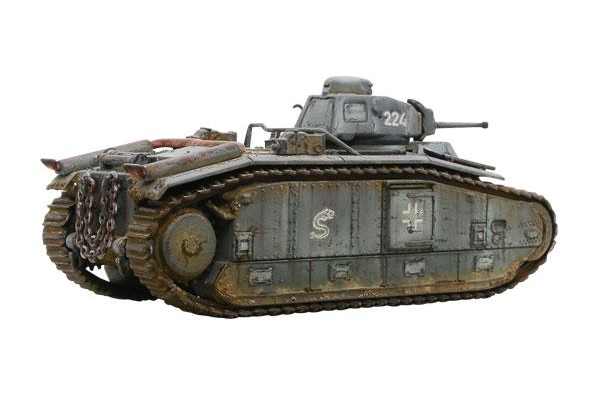 The most powerful capture tank from this arsenal is French Char B1 Bis, augmented by Flamethrower and dubbed Flammpanzer B2(F). The New Warlord Game/Italeri kit is fully plastic and will allow you to field this powerful but slow tank, equipped with a machinegun, main gun, and a flamethrower. This new plastic kit allows you to build it as a French or German version and even has German balkenkreuz decals.

There are also a dozen famous warriors of the Normandy that you can field. Among new characters are Lord Lovat, famous Commando No. 4 leader, Major Hans von Luck that was one of the few German officers capable of acting effectively and trying to stem the tide of invaders, and of course there is Dick Winters. I don’t think they’re overpowered, especially at 150 – 200 points per special character, so they certainly won’t break game balance.

Additional Rules: Beach Landing and Beyond

The appendix contains new minefield rules (finally!), with anti-tank and mixed and even dummy minefields to confuse your opponent. Germans were heavily entrenched in Normandy, so it’s no surprise that additional rules for the dug-in unit, foxholes trenches, and gun pits are presented. Italeri recently released a really good Normandy bunker plastic model in 1:56 for Bolt Action and other 28 mm wargames, so you can add it now to your force too, without having to scratchbuilt it. 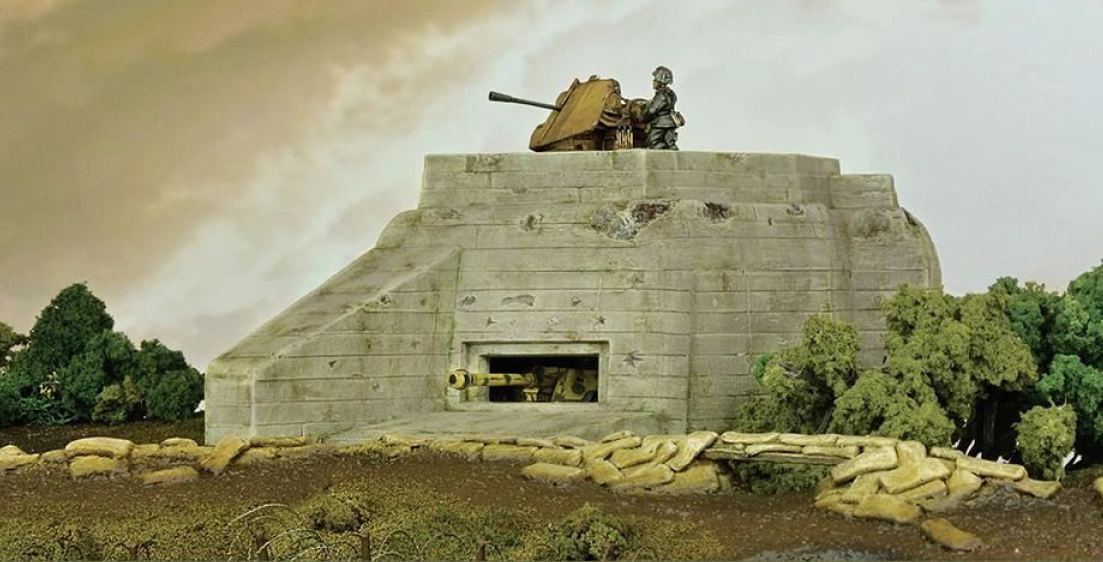 It’s a fantastic book – get it especially if you’re playing Germans, British, or US Army. Scenarios are really good and the additional rules and units are plentiful. It’s a thick book packed with content and a must-have for western front late war players. It’s also less than $20 on Amazon, so it’s certainly a great deal.

I’ve made some objectives and actually not only for WH40K, but some…

Sveinn harried in Denmark day and night: he killed men, looted all…