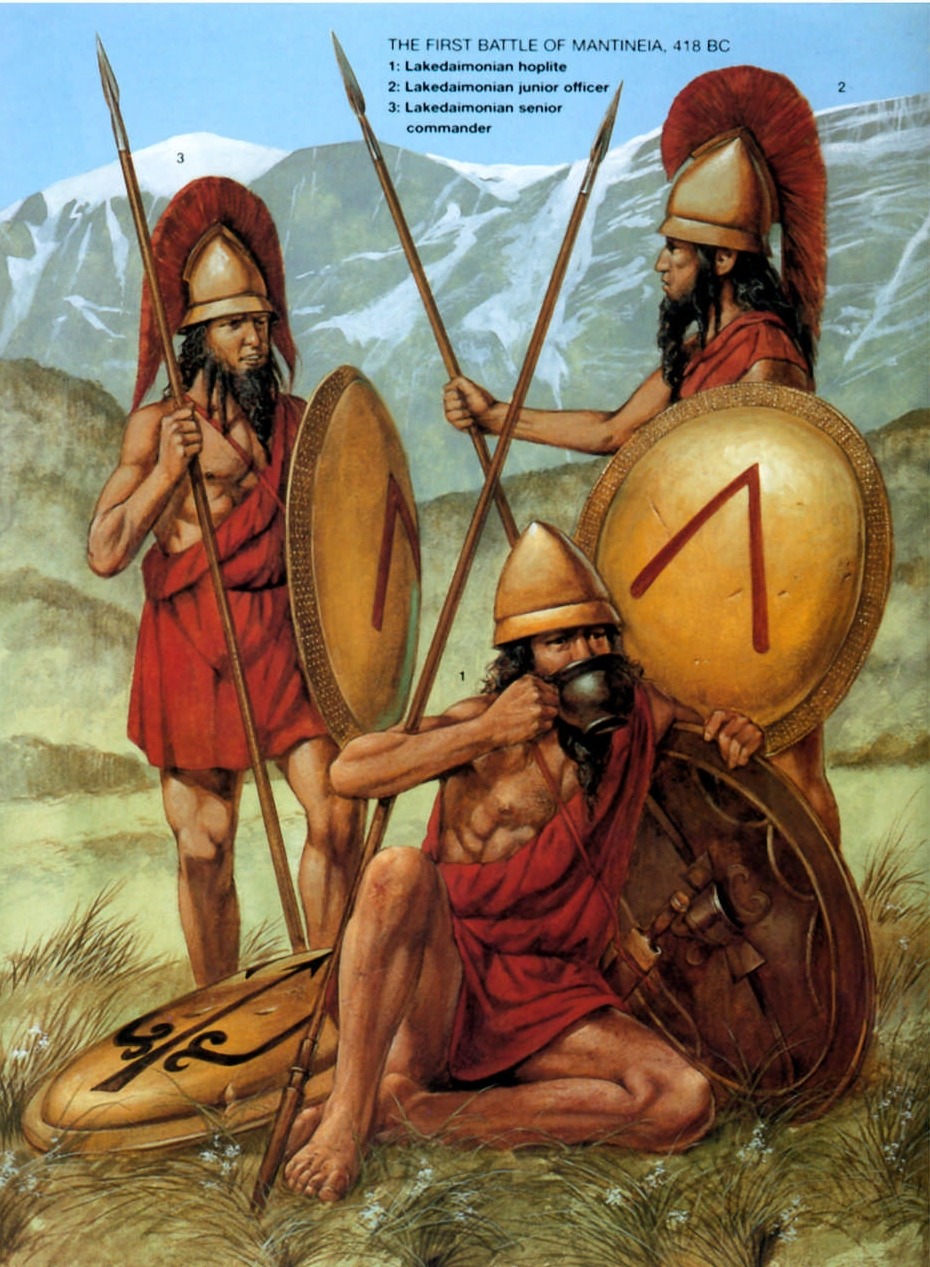 Unarmored Lakedeimi (better known as Spartans) at Mantinea, 418 BC. Pic from Osprey book.

The sheer amount of plastic Ancient Greek kits that Victrix makes Greeks the number one choice for hoplite players. Here’s my review of boxes of Unarmored Hoplites and Peltasts, which also contain Greek slingers and archers.

What conflicts you can use them for?

My hoplites are based for WAB as the Greek mercenaries from excellent Alex the Great supplement.

There are two sets of plastic hoplites on the market currently: Victrix and Warlord Games. Compared to Warlord Games plastic Hoplites set, Victrix miniatures are much bigger, chunkier, and more detailed, even for these sculpts without linothoraxes.

Warlord Games frames also contain fewer parts, so the variety would be lower. On top of that, Warlord Games sell just boxed sets of “Classical Greek Phalanx” and “Ancient Greek Hoplites” but the sprues are the same. The difference is that you get 2 figure command sprue in the latter box. Warlord Games also doesn’t sell plastic peltasts, slingers, and bowmen, offering these figures only in metal. And their metal peltasts and slingers sculptures are inferior compared to Victrix.

As for the cost, they’re priced similarly, with maybe Warlord Games being not much than 10% cheaper on a figure basis. However, WG Hoplites have one advantage over Victrix – they come with a transfer sheet containing more than 100 shield transfers. 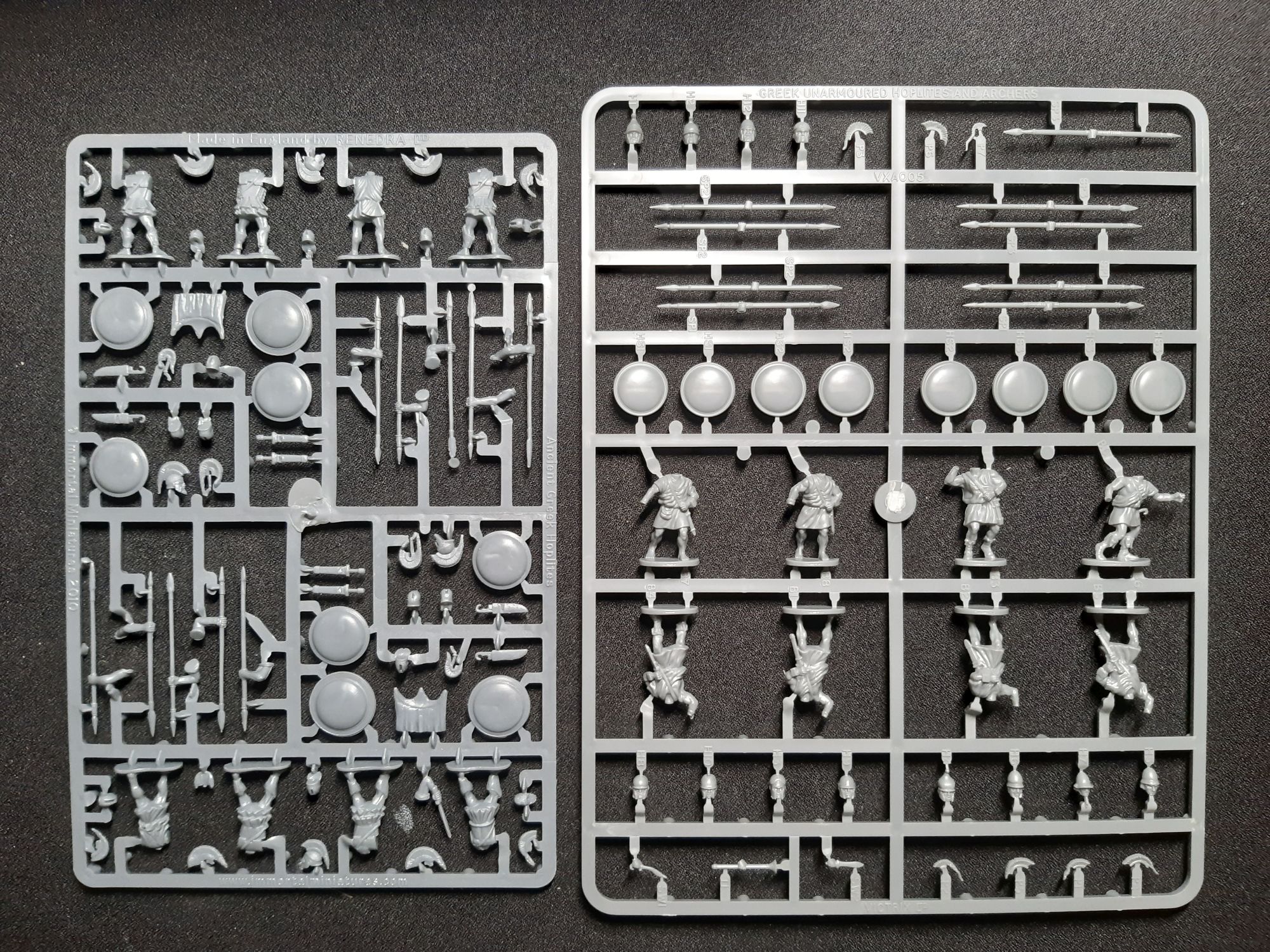 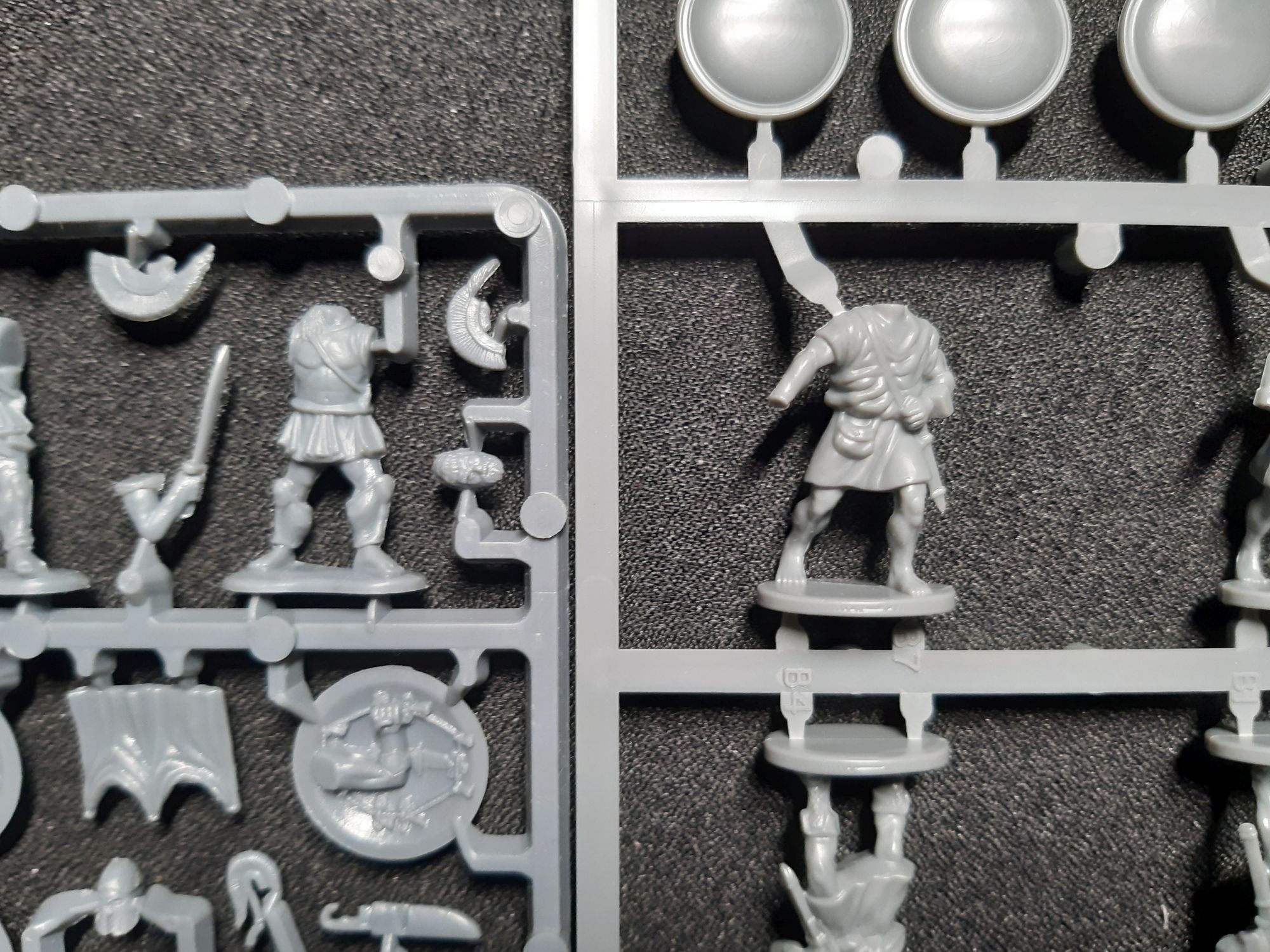 You can see that the Warlord Games hoplites are smaller than the Victrix hoplites. This is typical for Warlord Games minis across other ranges too. The difference is maybe 20% in size. I wouldn’t mix them in a single unit, but they wouldn’t look odd when grouped up in different units on tabletop.

Victrix also sells dedicated transfers on the website, made by Little Big Men Studios, but I honestly don’t like them much, as they’re too embellished and not that historical. Warlord Games’ transfers are way better, as they feature paintings you can see on the Greek vases or in the Osprey books about hoplite warfare, like the Athenian owl, Gorgon or Thessalian Pegasus. Also, WG sells real water transfers, while Little Big Men are printed on decal paper, so they’re kind of homemade. You have to cut out every single LBM transfer with scissors or an x-acto knife, peel the sticker and stick them on a shield. This takes lots of work, and the results aren’t great as you can’t use a decal medium on these. Print on LBM transfers also frankly isn’t crisp, not to mention they’re sold at a premium price.

Another reason why you’d want to choose Victrix over WG is the much larger number of plastic kits available from Victrix. It would be easier to maintain a more uniform look throughout your army, considering that Warlord Games figures are much smaller.

So to conclude, Victrix hoplites are superior to Warlord Games hoplites in every way, except for shield transfers. Luckily, WG transfers fit great on Victrix hoplons, so I decided to use them on my army. 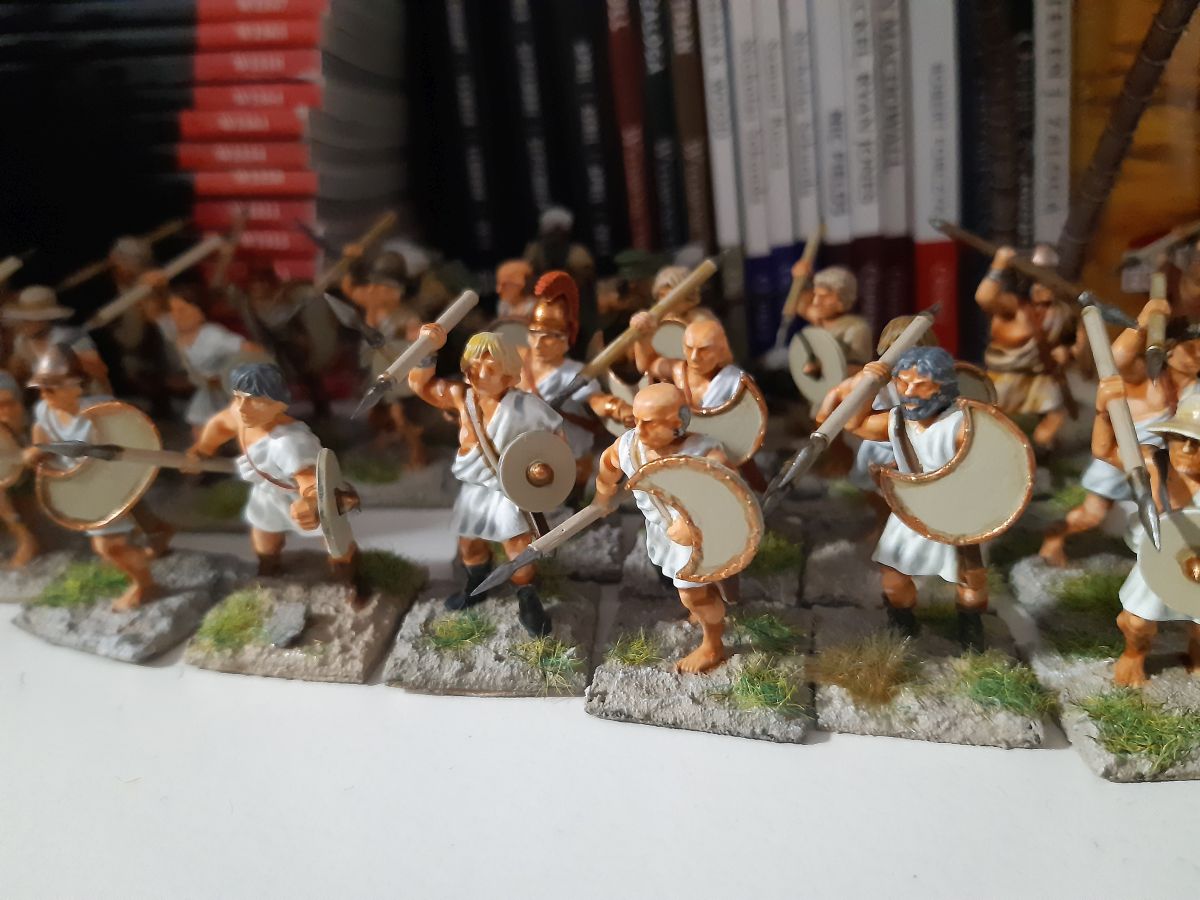 This kit is called “Greek Peltasts, Javelinmen and Slingers”. You’re getting 48 unarmored peltast or light infantry figures that you can arm with javelins and a variety of pelta wicker crescent shields and smaller round buckler shields. I also really like javelin bundles that look good on skirmisher psiloi, making a great option to build javelin without the shields.

There are both javelins and longer spears on the sprue and lots of armored and unarmored heads, allowing you to create a variety of poses. There are also swords, including Greek kopis, crests to top the helmets and even trumpets allow to make command figures.

And that’s not all. Besides main frames, you’re getting smaller frames of slingers, with optional slinger shields. There are 8 slinger figures in the box, enough to build a small unit. 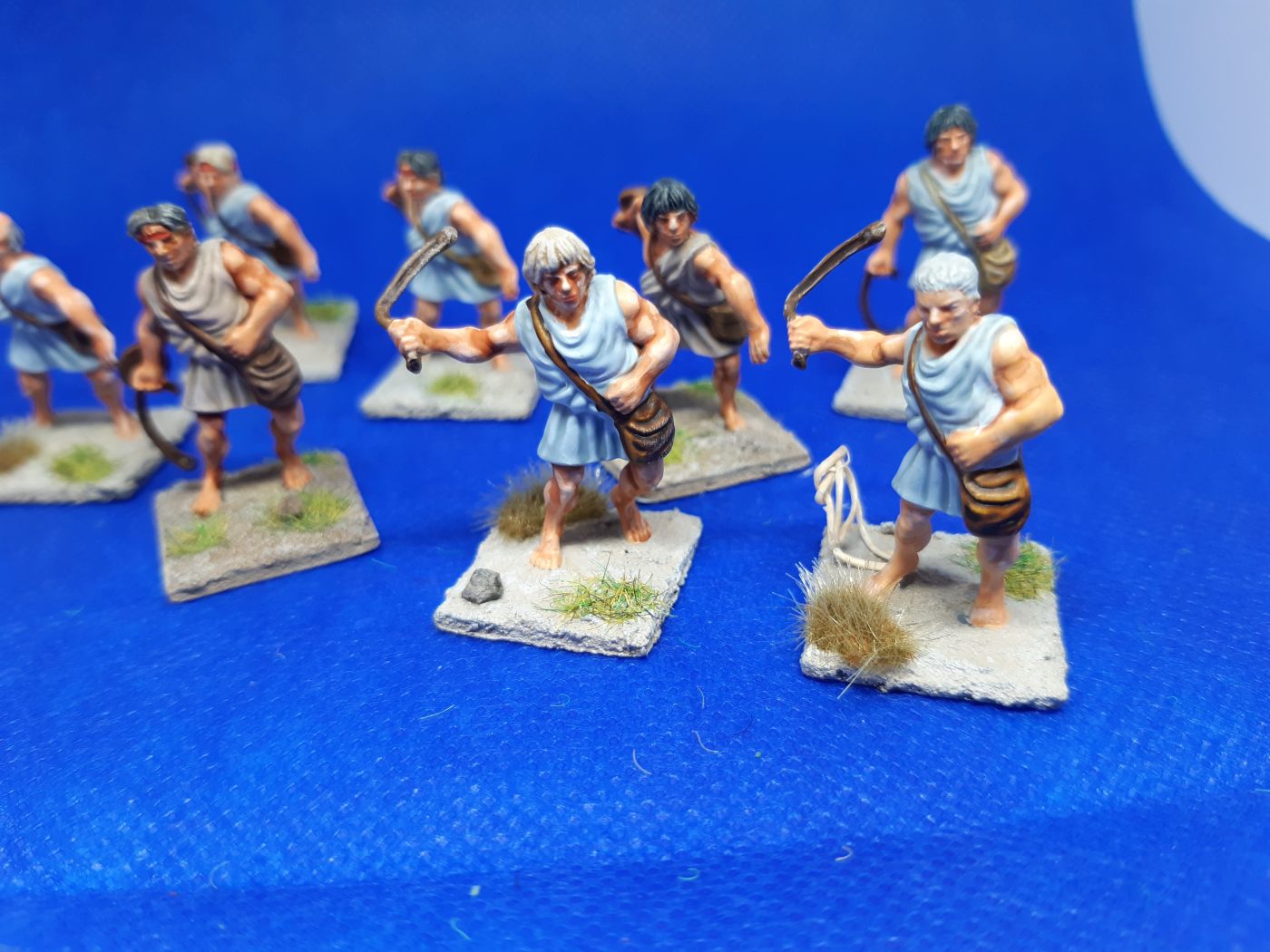 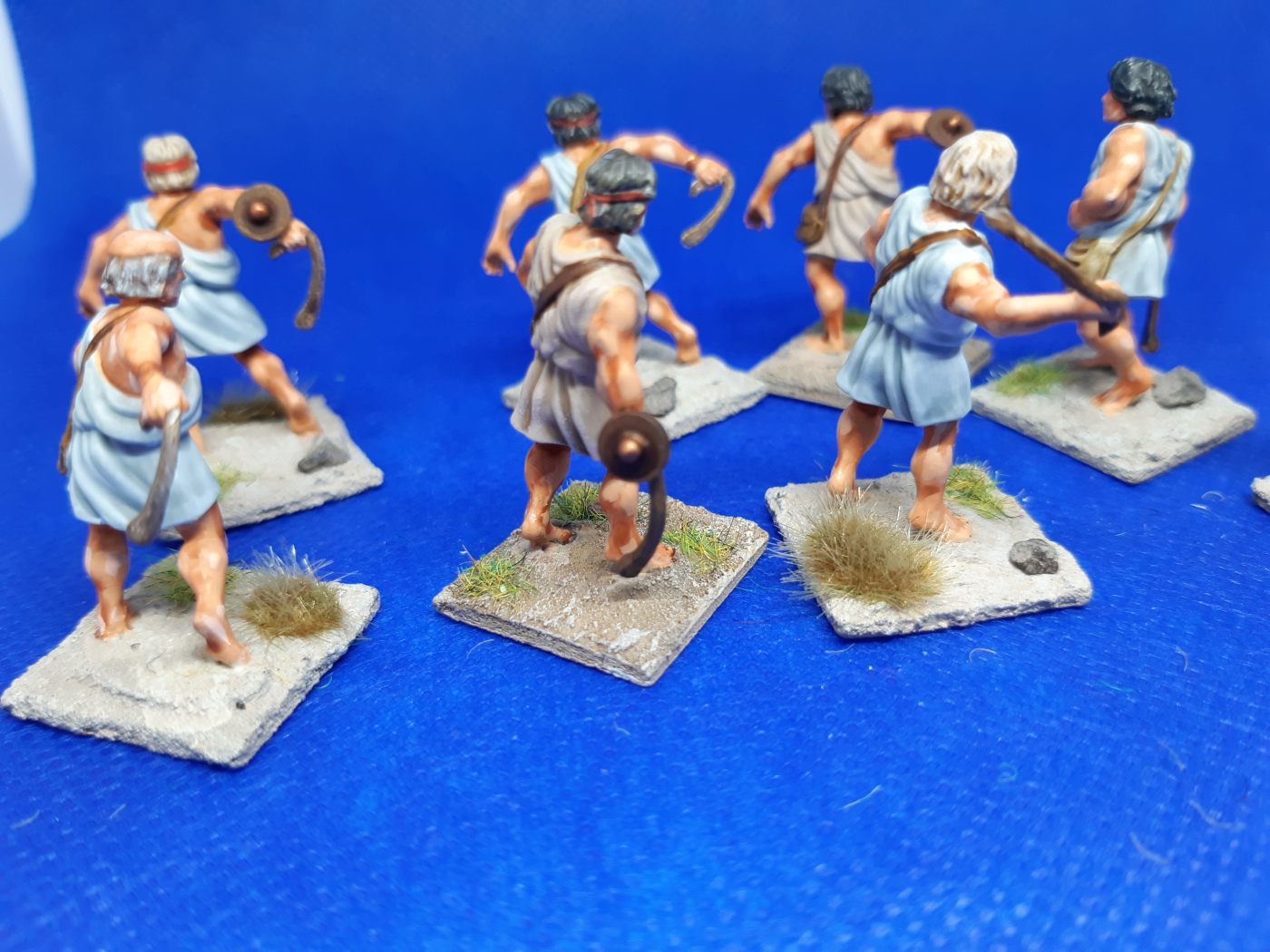 Slingers. Painted with Citadel Apothecary White Contrast Paint, with some Vallejo as an undercoat. These figures take Contrast Paints quite easily. All figures based on 20mm squares for WAB.

Unarmored hoplites are almost the same sprues – which is kind of a bummer, as you’re getting the same bodies and heads. The difference is that you get spears and hoplon or aspis shields. Everything else is the same. 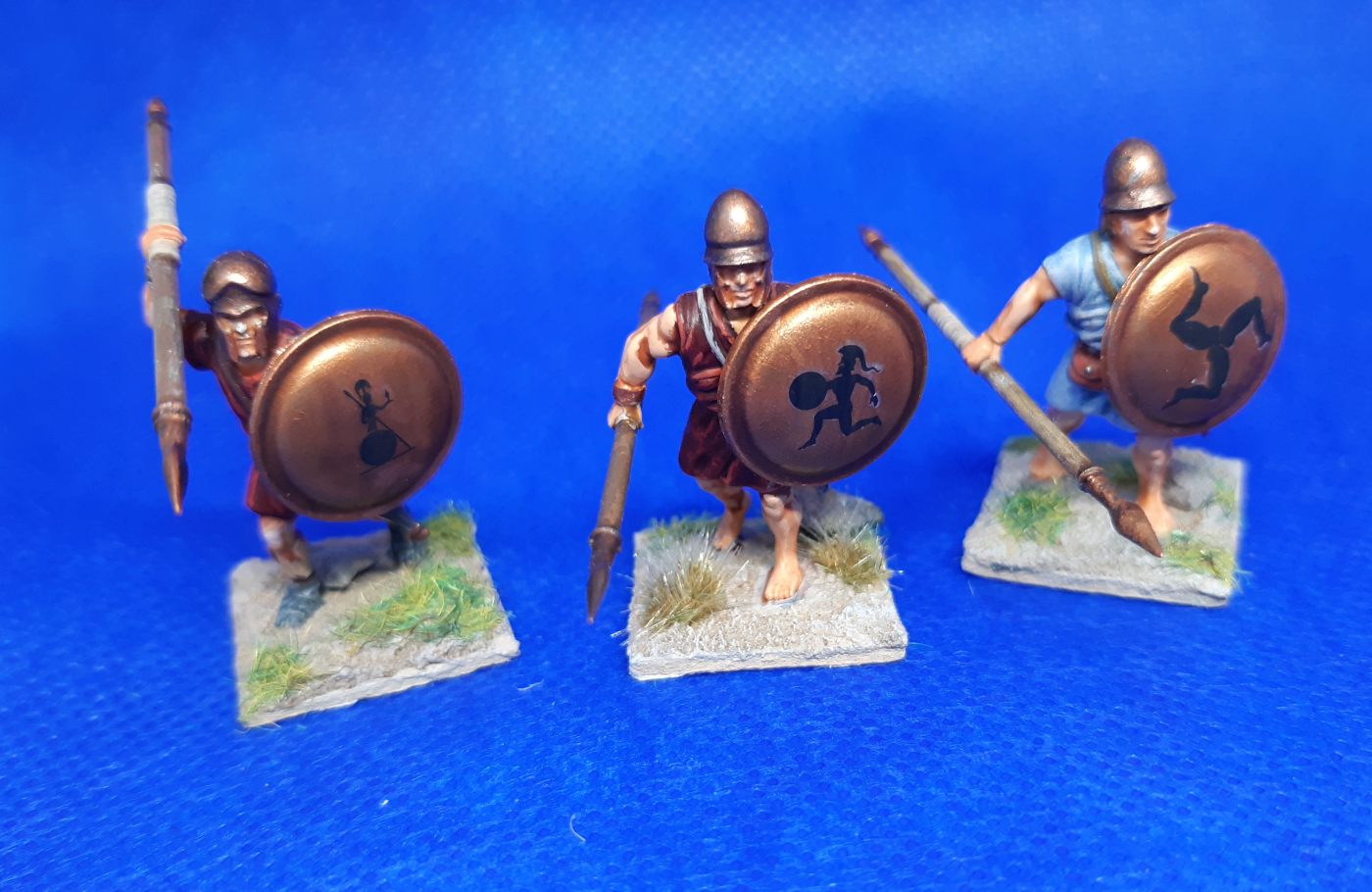 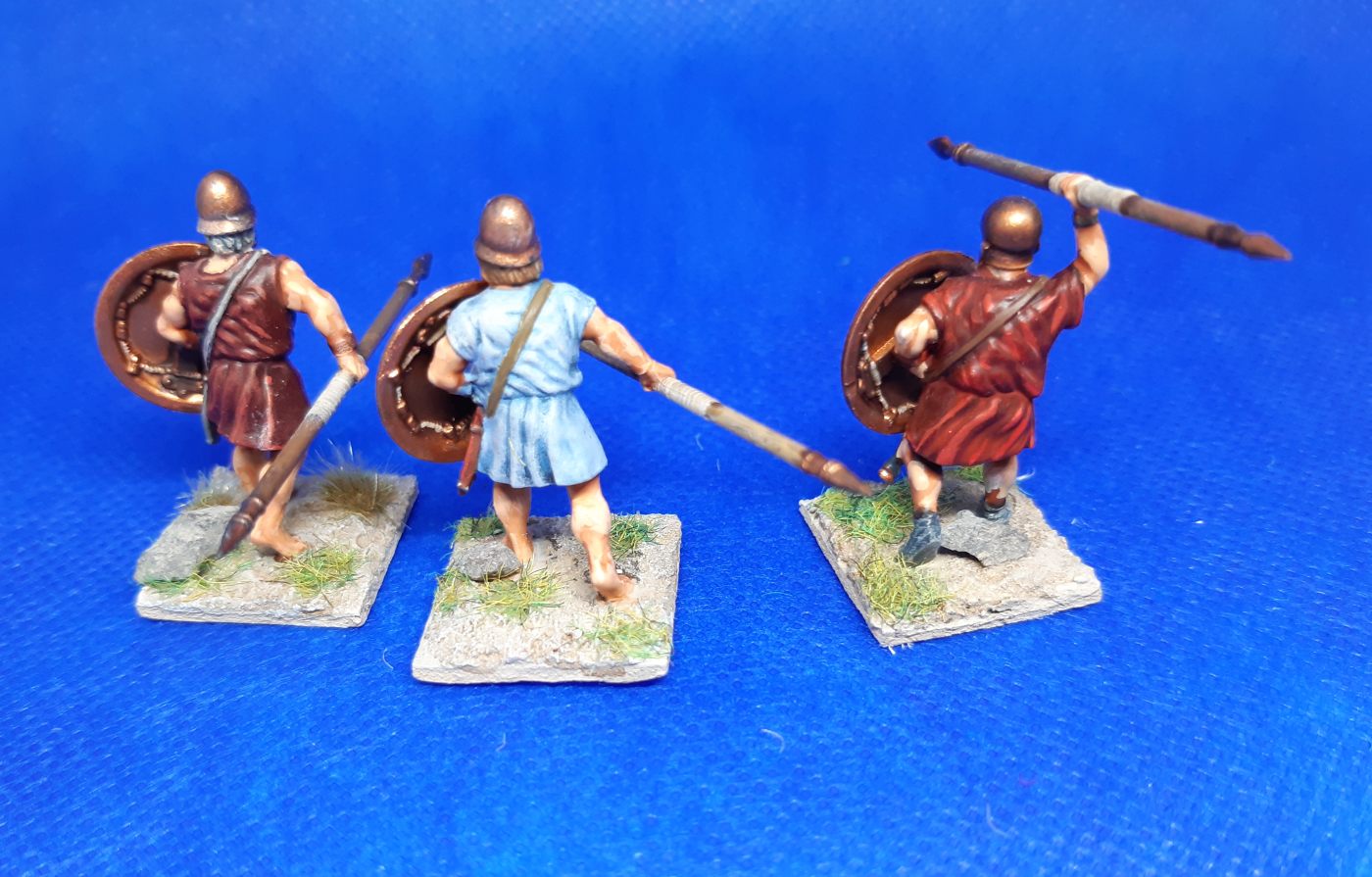 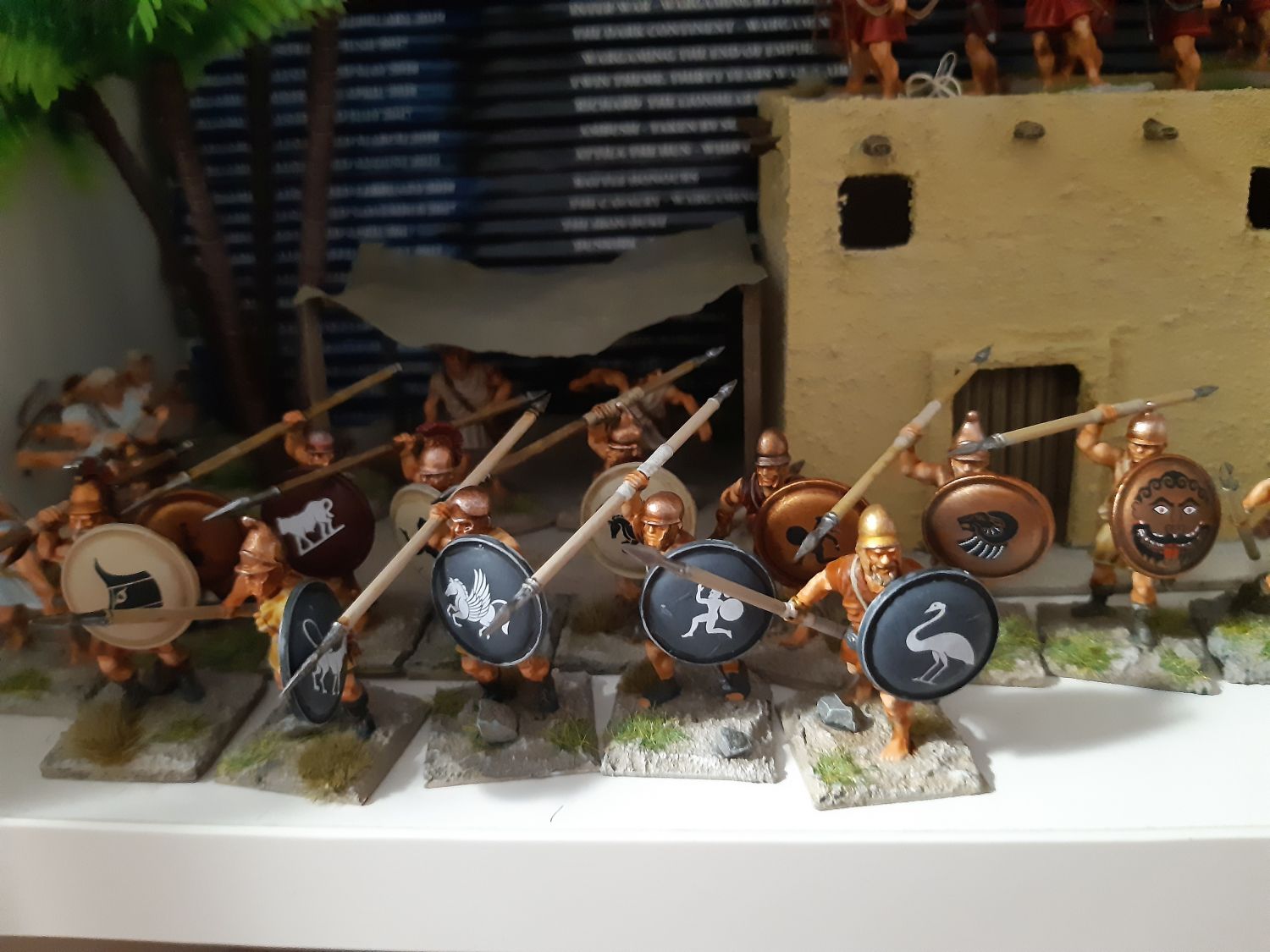 Additionally, you get a small sprue of eight bowmen. Unlike Persians or Scythians, Greeks weren’t renowned archers, but still some took bow as a weapon, especially in Greek colonies in Asia Minor. 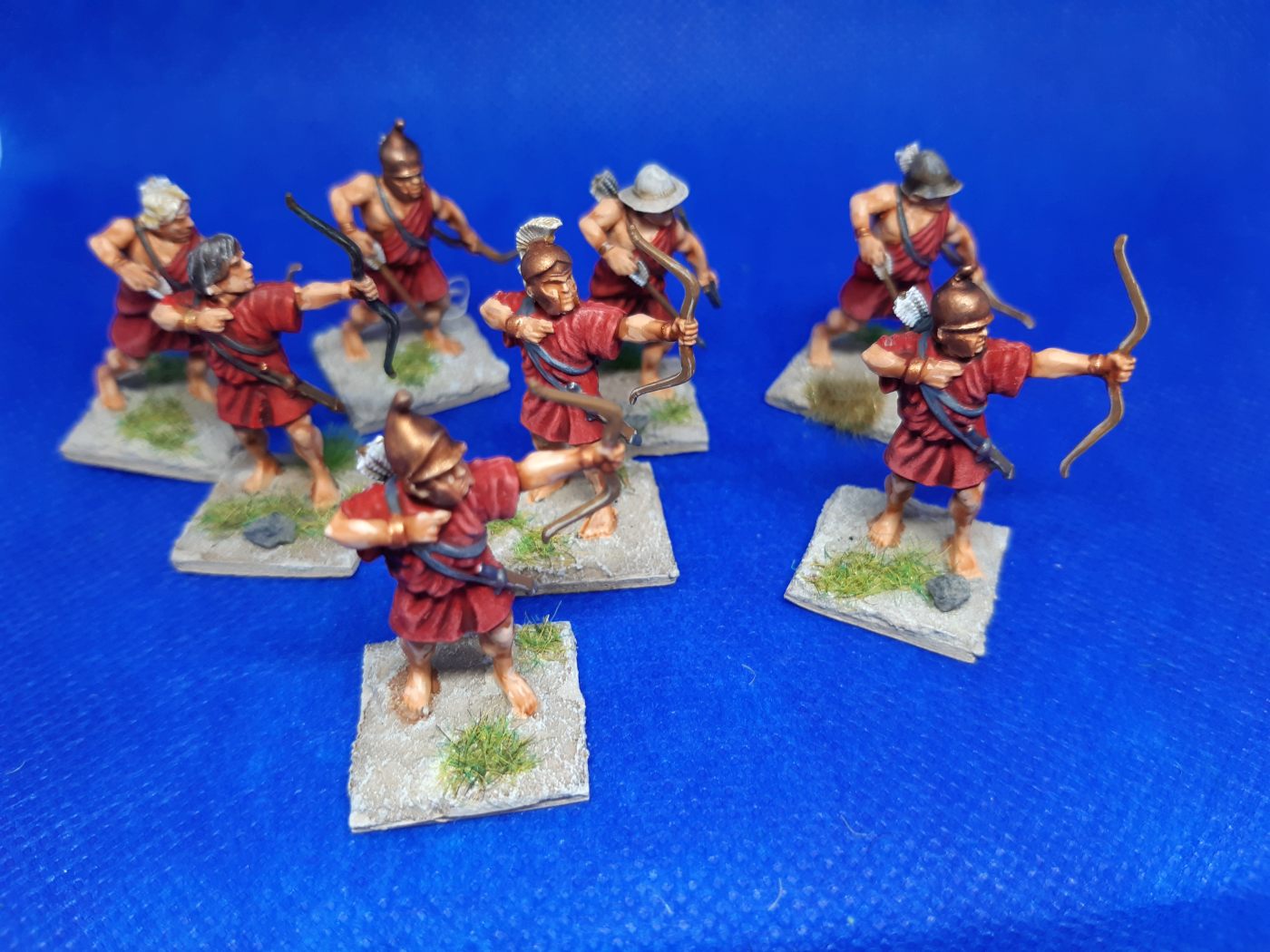 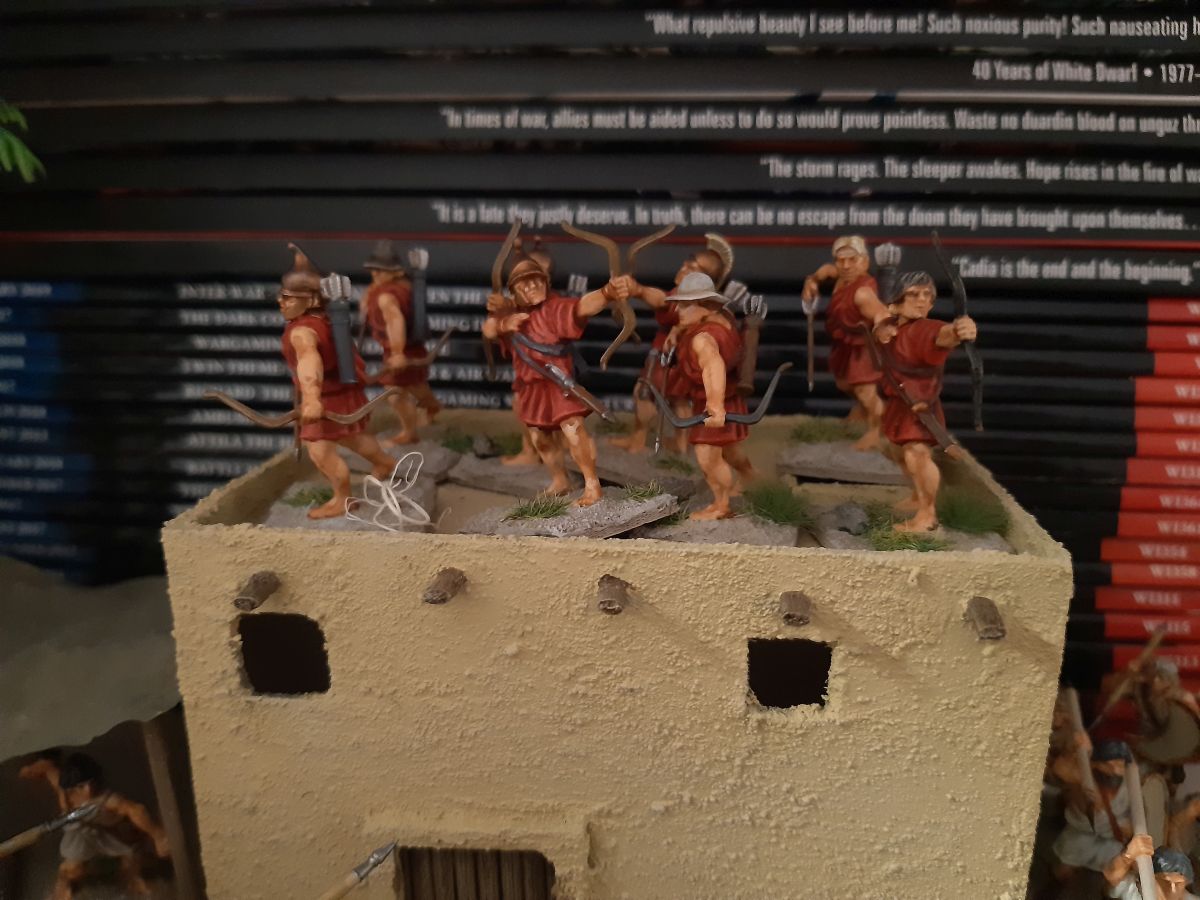 Bowmen. I painted mine red, as Xenophon says that famous mercenary Cretan archers wore red tunics. Most wargames, including WAB allows including Cretans as an elite unit.

How to build plastic Victrix Hoplites and Peltasts?

In both cases build is very simple. Pick the body and add the weapon hands, heads, and shields and you’re done. These figures require minimal cleanup, with mouldlines being easy to remove. One thing I highly suggest is to paint shields and figures separately and glue them at the final stage. Gluing shields is easy thanks to the wide spot connecting the shield that you should paint as a leather strap. Painting is quite easy, and when undercoated these figures are perfect for Citadel Contrast Paints or their new Army Painter equivalent.

Some people don’t like integral bases that you can find in most Victrix, but personally it’s not bothering me. While it adds a bit to the height of the figure, it’s easy to hide it by applying a thicker base of sand – I’m using Vallejo Ground Texture painted with Army Painter Banshee Brown, washed and drybrushed.

Pros and cons of Victrix Unarmored Hoplites and Peltasts

So to conclude, both kits are great and I can easily rate them 8/10. There are some minor quibbles, but overall they’re the best hoplite Greeks on the market that would look great on any Peloponessian War table.

I’ve made some objectives and actually not only for WH40K, but some…