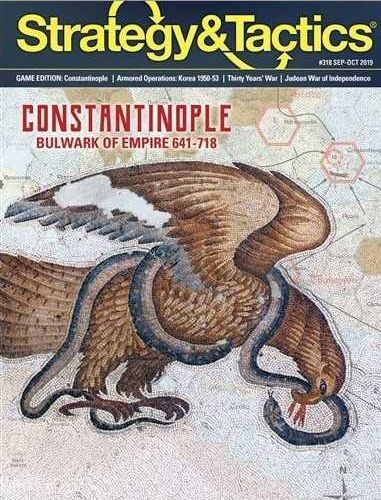 Strategy & Tactics magazine games often cover offbeat topics or uncommon campaigns and Constantinople (S&T 318) is one of them. It’s actually the only wargame focusing on the late 7th and early 8th century Byzantium thematic period, with the name coming from thema (provincial) system, created by byzantine basilei (emperors).

At that time, Byzantium, or Eastern Roman Empire was still major power and the most powerful state in Europe and Asia Minor, but its position was precarious. Byzantine empire was gnawed at from all sides. Byzantines were encroached by various emirates, splintering off of Mohammed’s state after fitna’s (Muslim civil wars) infighting from the south and east, emerging Germanic states from across the Alps, like Lombards (or Longobards), Slavs, and Bulgars from the north and various nomadic tribes like Khazars, boldly striking from Asian steppes. It’s a very interesting period of history, dark ages in southeastern Europe and the Middle East, and indeed covered rarely in wargames. The only similar game on this topic is Justinian by GMT, which is a bonus, but a full-fledged game included in the GBOH Cataphract module.

Constantinople: solo wargame in States of the Siege style

As a byzantine Basileos, you will have to try to maintain and protect your endangered empire, conserving as much territory as you can in the game’s 7 or 10 turns. This is done on a hex grid map, with invaders going through set routes, eventually ending in Constantinople. Your forces can go wherever you want, intercepting enemies, lifting sieges, and even attacking their territory. There are seven enemy factions, with three of them being activated and hostile at the start of the game. Additional factions can activate each turn randomly, adding even more pressure.

Random events table. Most of them are unpleasant for the Emperor, with the worst being enemy activations, basically meaning declaration of war from the seven enemy forces. Other event might be mitigated by lucky dice rolls and high Basileos capabilities, and even possibly can help you out a bit or hinder your enemies. This makes the game quite random, but not unpredictable, making it quite replayable.

The goal of the game is to get as many Victory Points at the end of the game as possible, which requires you to hold as much ground as possible, and conserve your treasury (very important, since you can get as much as half VP for having max 99 bezants at the conclusions). Alternatively, you can try conquering 4 enemy fortresses – barbarian seats of power, which is difficult, but definitely possible in 10 turn game. You can also instantly lose if any barbarian army takes the Constantinople.

Your forces are represented as single counters being an army-sized unit (10,000 to 30,000 men) chosen from provincial garrisons that can’t move, but are cheap and require no maintenance, Thematic forces from themes (provinces) that can move but require payments once moved out from their province, Tagmata or royal guards and Foederates or allied barbarians. This reflects earlier Western Roman Empire force breakdown of Limitanei and Comitatenses. You can also recruit Strategoi or generals with their retinues, and the leaders are very important in battles. There are also fleets that can transport your armies and even engage the fleets of Egyptian emirate.

Battles are resolved typical for hex and counter wargames using CRT, with column shifts awarded for terrain, fortresses, and leadership capabilities. You could also use stratagems to increase your chances of winning. Units have only a single stat, which is strength. Leaders have additionally leadership skills, providing CRT shifts. Enemy army strenght is hidden, until you encounter them in battle or revealed by using scout action. 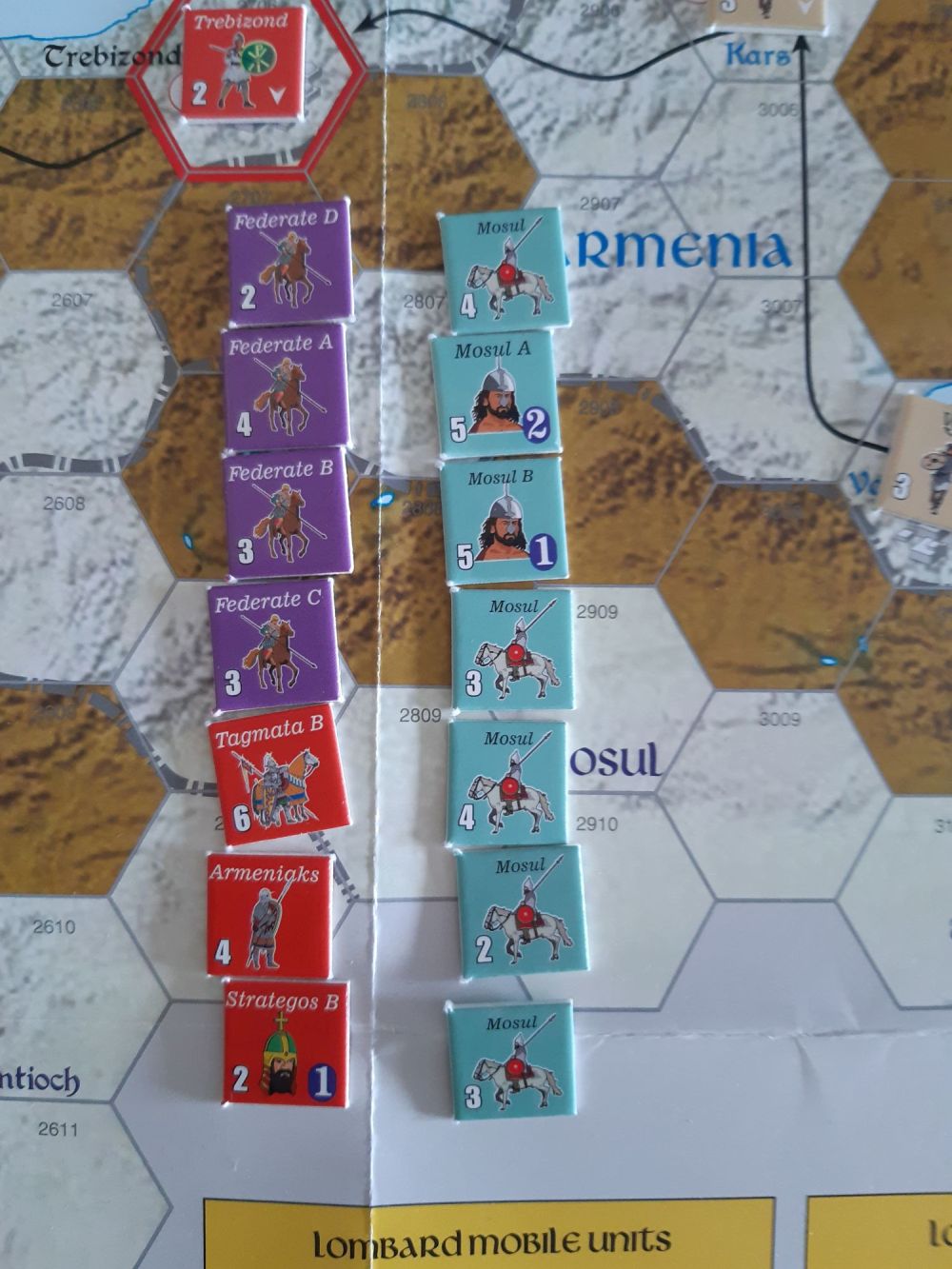 Byzantium and Mosul Emirate forces arrayed for the battle for Trebizond (sometimes spelled Trapezund), at the border of Armenia. Byzantine forces are augmented by Federates or (Foederates) barbarian mercenaries. Number to the left represent unit strenght, while circled right number shows leadership of the commanding general. In case of two generals commanding forces, only the higher number is used. There are no movement capability in units, as this decided by a die roll each turn, with modifiers from leaders and starting the turn in forts, representing better logistics.

Byzantine intrigues are represented by treachery capabilities, allowing you to bribe enemy forces or incite rebellions, which gives you more stuff to do besides repelling invaders. Bribing the barbarians out was a prime policy of rich Eastern Roman Empire, since invasions of Attila but it’s long term results were catastrophic.  You can buy stratagems counters to improve capabilities or use them to conduct these special actions.

Basileos capabilities include Walls of Constantinople, giving CRT shifts, Religion, making it easier to incite religious treachery, Statecraft to help deal with random encounters, and more.
Finally, you can build monasteries to raise income and fortresses acting as additional rally points for your troops. 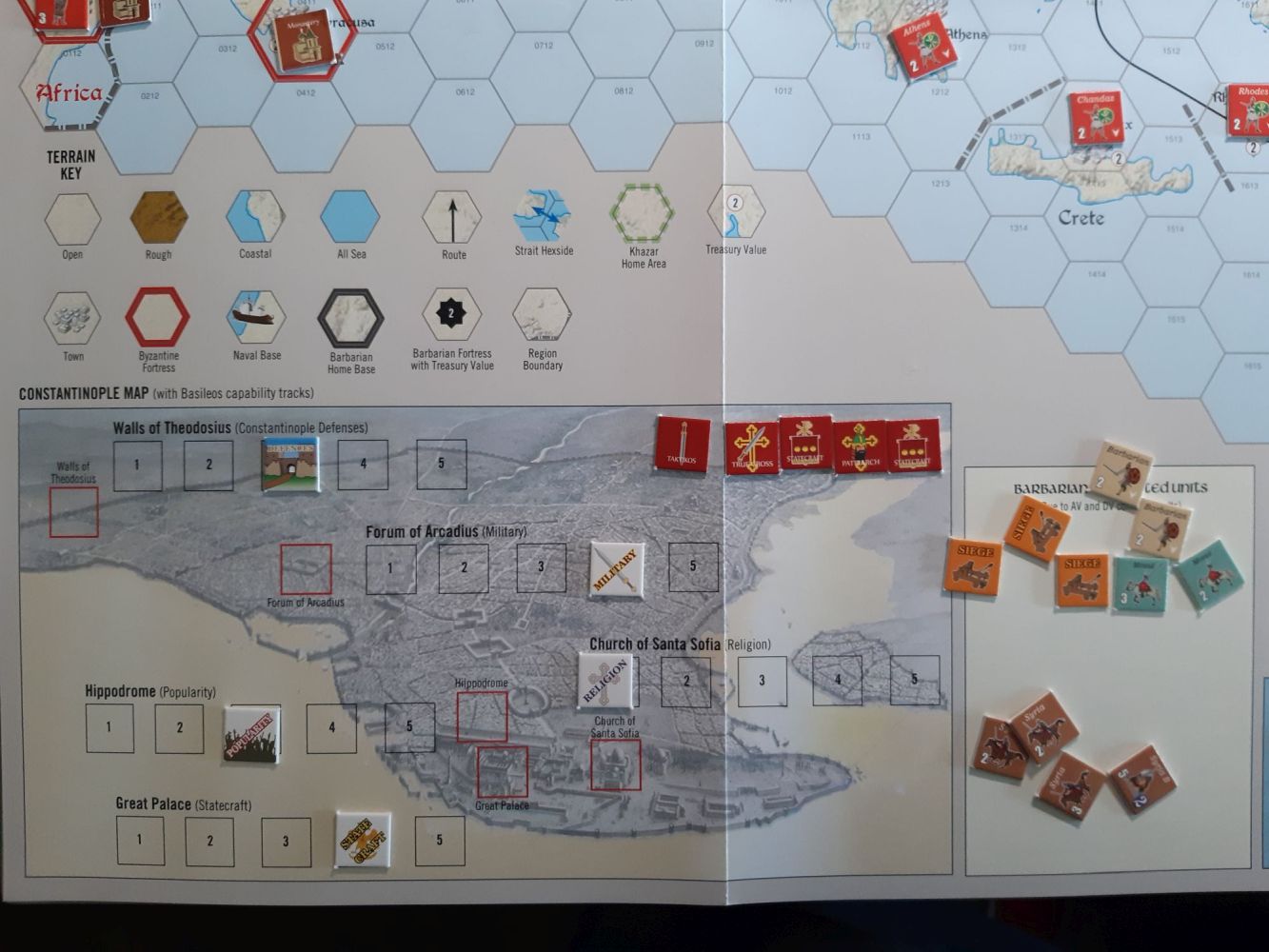 Some additional rules cover Armenian uprising, sieges, pillaging, church synods, barbarian resurgence and even personal duels between commanders. There’s quite a lot to do in this game, and the 16-page manual (+2 additional pages of optional rules) is pretty dense, so it’s definitely not a simple matter.

Also, don’t forget to download optional rules and a scenario (pages 17 and 18) from S&T page. There’s also errata on BGG, but it’s not extensive.

There are not many wargames in this period, and there are exactly zero solo wargames focusing on Thematic Byzantines, so Constantinople definitely stands out. It’s worth picking this game up if you can, as once it sells, it will be gone unless DG reprints it later as a boxed game. Playtime is maybe 2 to 3 hours. Setup will take you no more than 10-15 minutes. The components are typical DG magazine games fare, so paper map 34” x 22” paper map, 176 counters, and 16-page insert to the magazine. And it definitely has the chrome, putting you in a boots of ERE Emperor, trying to save his empire, with many historical rules. And if you don’t know much about the 7th-century Byzantium, Joe Miranda has written a really good article in accompanying S&G magazine that will introduce you into Byzantine politics and warfare.

This pretty obscure game definitely deserves more attention from wargamers. If you like State of Siege type games, that are much more complex than Ottoman Sunset (a very simplistic game with little player agency), you will enjoy Constantinople too.

I’ve made some scratchbuilt terrain in recent months and it was fun!…

There are quite a few interesting hex and chit or card…